Chakras and Their Archeyptes by Ambika Wauters – Review 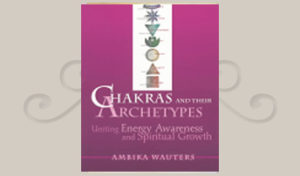 It was during a phone conversation that I first heard of the relationship between chakras and their archetypes. This book was highly recommended as a means to this knowledge.In her introduction, Ambika Wauters describes this book as a guide to ” freeing oneself of limiting, negative patterns which sap vitality, and helping one move toward greater freedom and empowerment.”

Though she does an excellent job of giving an overview of each chakra, her focus is definitely on describing the functional and dysfunctional archetype of each. This she does in a very clear and easy to use format. While having read the book in its entirety, it is quite easy to use as a reference when wanting to review one or all of the archetypes.

The book begins with a definition of archetypes. She references Carl Jung’s book, Archetypes and the Collected Unconsciousness, as her  impetus to study and learn about this subject and describes her personal journey of discovery. She also explores the deep roots the archetypes play in stories, films, television, and history. Each chakra is then briefly explained individually and the reader is first introduced to the positive and negative archetypes of each.

The remaining text is divided into seven chapters, starting at the root and ending with the crown. Each chapter is organized in the same format. The chakras, as well as their functional and dysfunctional archetype is discussed. Wauters then presents two case studies of people she has worked with to better show the reader how  these  archetypes can reflect in our daily lives.

The reader is then given a series of exercises designed to help release the old negative patterns and a meditation exercise to encourage the new, or positive archetype. A series of affirmations is then presented to further release the negative patterns or beliefs. An easy to follow chart is included with the chakra, archetypes, and emotional issues clearly displayed. The following is a brief overview of each chakra with its corresponding archetypes as described in the text.

The Root Chakra grounds the spirit in the material world, according to Wauters. She describes the dysfunctional archetype as The Victim. The victim feels that something has happened TO him. It feels that all choices have been taken away. The positive archetype, The Mother, takes responsibility for itself. It is able to manage its own life to be happy and healthy.

The third chakra is The Solar Plexus. This chakra deals with self esteem, self worth, confidence, decision making, and power. The Servant, the dysfunctional side, under values its basic worth. On the other hand, The Warrior is the strongest of all archetypes. The Warrior lets us be the hero or heroine in our own lives.

The fourth chakra, The Heart Chakra, centers around love, joy, unity, kinship, and peace. The dysfunctional archetype is The Actor or Actress. This archetype goes through life acting as though everything is fine, but spends its time protecting itself from hurt. The Lover, or functional counterpart, lives its life from a place of love. The Lover is in touch with its feelings and lives in the now.

The fifth chakra is The Throat Chakra. It is the center for truth, communication, integrity, will power, and creativity.the dysfunctional archetype is The Silent Child. The Silent Child buries its feelings and does not reveal hurt, pain, or anger openly. This can lead to a life full of frustration. On the other hand, The Communicator takes responsibility for what they say and how they say it. Speaking up and being heard is essential.

Wauters describes the sixth chakra as The Brow Chakra, which she designates as the control center of the body representing wisdom, knowledge, intuition, discernment, and imagination. The dysfunctional side of this chakra is The Intellectual. The intellectual focuses on the left brain and seldom engages with its feelings. He has an over-stimulated mind and is often tense due to worrying and thinking too much.However, The Intuitive has the gift of inner site and trusts his inner knowledge to provide guidance and is able to see stress due to change as part of the process.

The seventh and final chakra is The Crown Chakra. The two archetypes of this chakra arevThe Egotist and The Guru. The Egotist is the narcissistic personality which is boastful and ungrateful. The Guru embodies beauty, spiritually, and connection with the Divine. The Guru recognizes that all things come from the higher self.

This book is a wonderful resource. It is easy to go back and reread a particular archetype and go through the meditation and/or the affirmations. The case histories provided offer a way to see how the archetypes can affect our everyday life, and how healing these chakras can positively affect our lives. I would recommend this book to anyone who is on a spiritual path or is searching to improve their life.

You Can Heal Your Life – Louise Hay Book Review

The Tao of Allowing – GP Walsh