The Cure is…? A Movie Review 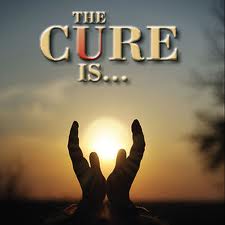 What you hold in your beliefs becomes the overriding, determining factor in your health. – Bob Proctor

Bruce Lipton, PhD in developmental cell biology and previous Stanford Scholar, explains in The Cure Is…? that we are not, as has been taught, actually beholden to our genetic code. What matters far more than the genes we were born with is the environmental “signals” without which no gene can be “switched on” or off. And even more important than these signals, are our perceptions of the signals—or, more simply put, our perceptions of our environment. The interesting thing, and what this film proposes—like others before it—is that our perceptions are under our complete control.

Less than five percent of disease is caused by genetic factors, Lipton argues. When we talk about breast cancer or obesity being genetic, we only have to look so far back into our family records to see these are in truth relatively new diseases. Our great-great grandparents likely did not have them. They are diseases of lifestyle, and of thinking.

That our perceptions are under our control and are so very important to our life and health isn’t a new idea. More than 2,500 years ago Guatama Buddha is believed to have said, “To enjoy good health, to bring true happiness to one’s family, to bring peace to all, one must first discipline one’s mind.” The mind can bring us health and happiness it would seem, or it can bring us their opposites; the choice is ours.

This is nowhere more poignantly expressed in The Cure Is…? than early on when we meet a man who had been diagnosed with lymphoma and stage one lung cancer and given less than a year to live. He explains, “I feel in looking back at my life that I got myself into a certain situation where I felt so overwhelmed, and so trapped in a way, emotionally, that I created a way to leave.”

Can the mind send the body the message that we no longer wish to live? And can the body then follow the mind’s direction?

Lipton’s explanations of gene science and the insights of this man tell us a lot about what The Cure Is… and the power inherent in individuals in overcoming not only health crises, but emotional and psychic ones as well. As Bob Proctor, 50 year veteran of the human potential movement, says early in his film, “What you hold in your beliefs becomes the overriding, determining factor in your health.”

Marianne Williamson, Bernie Siegel, Deanna Latson, Gregg Braden—just some of the other voices coming together to lend their credibility to Proctor’s project. Years of work in science and spirituality, and a gathering of experience and hope merge in an effort to reach more minds, inspire more voices. 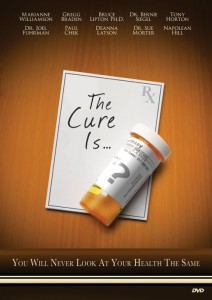 Still, credible voices, beautiful imagery, and ancient teachings retold as new aren’t everything. At one point Proctor states, “The body’s just an instrument of the mind; it’s like a dumb terminal…” Yet there are an estimated one billion neurons in the human spinal cord and at least one hundred million neurons in the lining of the digestive system, called the “second brain.” Lipton would call Proctor’s thinking on this matter a result of the old Newtonian materialism, and while it may seem a small thing, not recognizing our body’s intelligence is a large part of the reason humans refuse to recognize the indwelling wisdom of other races, of animals, of their own planet. There are other places the filmmaker’s science could be more finely attuned.

Perhaps the more important critique, and one which should come from inside the human consciousness paradigm, is that nowhere in the film do its authors or speakers mention how these principles work in a place such as the Mumbai slums—where poverty, disease, and oppression reign. Not to recognize that by virtue of our relative privilege, we are able to attend to needs higher on Maslow’s hierarchy (choose any other model you like), is to dismiss the absurdity implied when too many white first world faces discuss how positive thinking cures disease. It is not all that cures disease. And we must address this.

While it is not small, this oversight is also not new. Still, the message of the film successfully comes through, and its intention is good. And as we know, intention is nearly everything.

While I won’t tell you what the cure is, I will give you a hint: you have everything you need for the job already.

Click Here to Learn More and Watch The Cure

Adyashanti – The Narrator and Consciousness