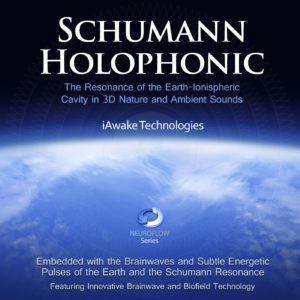 Review submitted by a reader.

I just learned a tiny bit of what the Schumann resonance is today. Interestingly, the resonance was predicted in 1952 by Winfried Otto Schumann, a mathematician, decades before we would ever be able to capture and replicate the frequency with electronic equipment. The Schumann resonance is created in the cavity between ionosphere and Earth’s surface. The resonance frequencies vary between 3Hz and 60Hz. Typically, they appear in the range that’s close the human body’s frequency, which is thought to be between 5hz and 10hz.

The science isn’t necessarily as important as the effect though. Seeing a picture of Rome’s Colosseum isn’t nearly the same as experiencing the Colosseum in all its glory. It’s about the territory, not the map. We are going to map out some of the territory for the both Schumann Holophonic Thunderstorm and Sea Ambiance by iAwake Technologies. You’ll get to decide whether or the territory is worth exploring.

I personally liked the thunderstorm version of the resonance more than the sea ambience, but I don’t know a single person who doesn’t like the sound of the sea and the ocean. As children, we’ve even played with sea shells to mimic the sound of the ocean. However, thunderstorms are right up my alley. They’re calming and thrilling. It’s like nature showing the best side of itself. At the same time that it is destroying with lightning, it’s is also giving life with rain. Balance.

I noticed the resonance about three minutes into the audio. I started meditating and then moved onto doing other activities while listening to both audios. My body felt lighter and more fluid like I was in water. It didn’t feel heavy like trying to run through water. It felt more fluid like wading through a shallow amount of water waist deep.

After I stopped listening to the resonance audio, I noticed that I still felt the resonance and had same feeling for a little while after listening. This is different than the usual flavor of brainwave entrainment. For a second, I was sure that I could hear the real resonance from the clouds above me while driving. If you’ve ever watched clouds while walking versus standing still then you’ll understand what I mean. When you’re actively moving, it’s like the clouds are standing still. When you’re standing still and pay close attention you can see the slight adjustments the clouds are making as they move along their course.

The sea ambiance version of the resonance had the same effect. I noticed it after listening and still felt light. I’m not totally sure if you’re actually able to hear the resonance in the wild. Maybe during a thunderstorm this is possible. What I do know is that you will definitely notice a visceral effect and feel the resonance.

The Schumann Holophonic Thunderstorm and Sea Ambiance by iAwake Technologies do most of the heavy lifting. While isolated in my room listening, I noticed a similar effect to when I’m outside and am being present. It’s not nearly as intense as an awakening experience, but the taste and wafting of the wisp of awakening is in there. I can’t say that you’ll actually have an awakening experience while listening though. I do know that if you’ve already had it and listen then it will have a kindred feeling.

The music is looped thunderstorms and waves. If you like that type of feeling in meditative music then you’ll enjoy the both tracks.

My rating for the thunderstorm is 5 out of 5 stars. It rocks. I enjoyed every minute of listening to the track and noticed effects faster than the Deeply Theta track by iAwake Technologies. It’s up to you to try out the music and see how it feels for you.

My rating fo the sea ambience is 4 out of 5 stars. This track is also great. I only take away one star because of personal preference. It will probably be a 5 for you if you like wave sounds more than thunderstorms. Both tracks accomplish what is necessary, bringing you back to being present with yourself and the world.

iAwake’s thunderstorm version is better to me than the sea ambiance version. Both are included in the “Schumann Holophonic” package. Try both and see how you feel. Both tracks accomplish the same task and will deliver equal results in my opinion. I noticed a kindred feeling to awakening where the boundary between the within and without start to dissolve. You may not have that feeling. That’s what it was for me. It was like the wafting a cherry pie scent, but it wasn’t the cherry pie. I also noticed that the feeling lingered. With multiple uses of the track, you may become desensitized to feelings. If that happens, it may be best to take a break and use regular music.