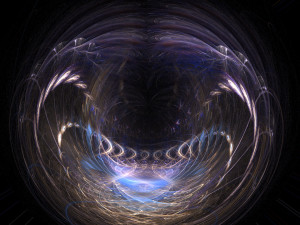 Dutch scientist Christian Huygens originally disovered the phenomenon of brainwave entrainment in 1665. He discovered that the pendulums in a room all became synchronized over a period of time , even though they were deliberately set to be unsynchronized. He termed this phenomenon “entrainment”.

The great scientists and thinkers are thought to have a higher degree of brain synchronization, which can indicate that both hemispheres were being used for a more balanced thought process.

In the 1970s, some advanced studies on behaviour, showed that during periods of deep meditation,the brain wave patterns were altered and both hemispheres were actually in harmony, while one hemisphere became dominant if the subjects were not meditating.

A report issued in 1973, by Dr Gerald Oster of Mt. Sinai medical center,titled ” Beats on the Brain”, explained that when different frequencies or sound waves were presented individually to each ear, there were pulsations,known as binaural beats that were created in the brain. As a result the entire brain resonated at the frequency and became entrained to that beat, just as the pendulums of the clocks observed by Huygens became entrained to the frequency. The phenomenon was later termed brainwave entrainment.

Further studies on brain functioning, and binaural beats, by Robert Monroe of the Monroe Institute of Applied Sciences, demonstrated that it was entirely possible to entrain brain wave patterns with binaural beats. He noted that the whole brain resonated to the frequency, and not just isolated regions, that were thought to be responsible for different functions. Using EEG measurements, it was confirmed that both hemispheres of the brain were in identically sychronized, and in an identical phase, and resonating at the same coherence,frequency,and amplitude.

The interesting discovery opens the way to actually assisting the brain or directing brain activity with binaural beats. Using specific frequencies or sound patterns, it has become possible to induce or entrain the brain waves at specific states, and there are many uses for application of brainwave entrainment.
Several brain wave patterns have been discovered.

The alpha wave pattern(8 – 12 Hz) of brain activity, is the pattern that is normally generated when we are asleep. It is a slow pattern , but not as slow as the theta (4 – 8 Hz) pattern, which is the pattern generated in deep sleep or the dream state. The delta pattern, which is the slowest pattern of all ,shows almost no brain activity and is the state of sleep without dreaming. It has been measured to cycle between 1 to 4 Hz. The normal pattern, generated in a normal wake state is the beta pattern, which resonates at the 16 – 24 Hz frequencies.

The EEG patterns can be associated with specific conscious states and research shows using brainwave entrainment, different states of consciousness can actally be induced. With lower frequencies and still being aware a unique state of consciousness known as the hypnogogia emerges It is commonly called the “mind awake/body asleep.”

Brainwave entrainment at a slightly higher frequency can lead to hyper suggestive states, and progressively higher states can be associated with being alert and mentally focused. These states that can now be induced by binaural beats, are often required for optimal performance of multiple tasks.

Altered states, may not necessarily lead to altered reality, but the percieved change in consciousness, can lead to changes in performance associated with pattern changes that can be induced with brainwave entrainment.

There are parallel sudies done with athletes in an attempt to understand an appreciate the state that is often referred to colloquially as being where “in the zone”where performances are at optimal with little effort.

Knowing at which frequencies the brain functions best and having the ability to induce those frequencies with binaural beats and brainwave entrainment opens a world of new possibilities. There may be some skeptics as expected, but it is easy to try the technology for yourself (recommendations coming). It may take some time to see some improved results.

It has long been proven and an accepted fact that music, which is essentially sound waves, can and do affect our moods. Further research in some areas shows that binaural beats in the delta/theta EEG range can be beneficial for a reduction in mild anxiety. Trials that include using binaural beats as supportive treatment in addition to conventional therapy treatments for mild anxiety, may be even more supportive of the efficacy of brainwave entrainment through binaural beats for altering states of consciouness.

There have been some reported cases of reductions in the time required for learning and a required amount of sleep for proper functioning. Some people claim that 30 minutes with theta frequencies can reduce the amount of sleep needed by several hours.

Theta waves are believed to help in learning, since children, with normally stronger theta waves,can stay there for longer periods than adults, and as a result, they can usually learn faster.

Brain wave entrainment at the Alpha-theta brainwave frequencies, has also been successfully used in treating addictions.

In one uncontrolled pilot study, utilising brainwave entrainment with brainwave binaural beats at the Delta frequecies, during a 60 day period, did show an improved effect on anxiety.

Extending binaural beats to affect body functions, may not be beyond the realm of possibility, as the technology has already demonstrated to be able to increase the production of some substances. In a controlled study,randomised adaptation concluded that the induced states can be utilised to decrease the acute anxiety in hospitals that often occurs before surgeries.

There is much promise for the applications of binaural beats as it has also shown that induced brain synchronization has enhanced the ability to learn. In the 1970s, it was proposed that inducing alpha brain waves would enable students to retain more information for longer periods, and recently, understanding the part that theta brain waves can play in learning is better appreciated.

With a better understanding of the relationship between theta activity (4–7 Hz) and the performance of the memory, training with biofeedback now suggests that some parts of the EEG activity can be increased, and that such activity may actually facilitate the task of the working memory a smaller part, it can help to increase attention and focus.

With the research continuing as the technology advances, we can expect new applications and improvements in the quality of performance as brainwave entrainment receives more widespread adaptation.

Well you possibly can send unconditional love to any 1
while meditating. secondly you’ll be able to heal on your own or anybody else through meditation. Again you will need to go to be able to inner peace. Feel all your internal entire body from check out feet can be enlightened. Send this enlightenment to the next portion associated with body which in turn requires curing. you may well send it to some one in addition who require it. Do the idea daily for any fixed time. Hope greater result will be there. This works only should you have succeeded to achieve inner peace and would like to convert it to unconditional enjoy.